SAWA is currently working on two wide-ranging projects: one along Reach 9 of the Santa Ana River in the Santa Ana Canyon Orange County for the U.S. Army Corps of Engineers (USACE), and another along Reach 3B in San Bernardino County in San Timoteo Canyon for the U.S. Fish & Wildlife Service (USFWS). In addition, The following are the services included in these major projects. 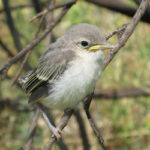 The Least Bell’s Vireo is a songbird that lives in Southern California creek-side habitats.  For hundreds of years these birds have come to California to nest and raise their young. In 1986, the Least Bell’s Vireo was listed as an endangered species. The main reason for this species population decline is loss of habitat and nesting failure caused by the Brown-headed Cowbird. Biologists search all suitable riparian habitat in the Santa Ana River Watershed for vireo presence. In areas of dense vireo populations, pairs are monitored throughout the season to collect reproductive data and Brown-headed Cowbird traps are deployed where parasitism may occur. A detailed report is produced annually (see Publications). 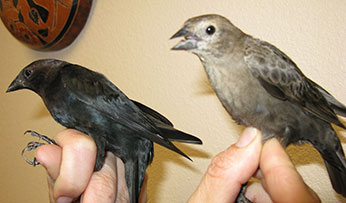 The Brown-headed Cowbird is a brood-parasite, which means it lays its eggs in another bird’s nest. Unfortunately, to the vireo and hundreds of other native bird species, when this occurs the hosts’ young usually do not survive.  One female cowbird can lay up to 30 eggs in one season, equaling a potential loss of 120 native birds hatched each year.  The cowbird has spread from the Great Plains states to the coast and is considered to be at epidemic proportions in Southern California. Biologists remove cowbird eggs and nestlings found in vireo nests. SAWA deploys up to 50 cowbird traps throughout the watershed in areas where vireos are known to nest and cowbird parasitism is expected. Traps are maintained from March through July near riparian habitat and at local dairies during winter. SAWA offers cowbird trapping for mitigation requirements. A detailed report is produced annually (see Publications).

The California Gnatcatcher is a small songbird typically found in coastal sage scrub habitat that is a year-round resident in Southern California. This species was listed as threatened by the USFWS in 1993 and is considered a species of concern in California. Like the vireo, this species is impacted by cowbird parasitism and benefits from SAWA’s cowbird trapping program. SAWA biologists conduct protocol surveys for this species for inventory purposes and to ensure they are not impacted by impending or ongoing projects.

SAWA biologists conduct breeding and wintering bird surveys at multiple locations within the watershed. The purpose of these surveys is to document changes in avian diversity and breeding activities in areas where habitat restoration or other habitat alterations (e.g. fire) may occur. These surveys, along with area search and point count methods are also used for baseline inventory purposes. Results of breeding bird censuses are published in the Institute for Bird Populations by Point Blue and the Cornell Laboratory of Ornithology. 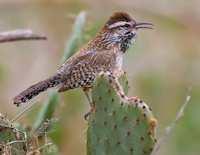 The Coastal Cactus Wren is a large, chunky wren found only in Southern California. This brightly colored bird nests almost exclusively in tall cactus plants. Unfortunately, wren populations are declining and becoming more fragmented as a result of the loss and degradation of cactus scrub habitat. This species is considered a Species of Concern by the California Department of Fish and Wildlife. When it became clear that there was little information about the occurrence of this wren in the Santa Ana River Watershed, SAWA biologists surveyed all historical and appropriate habitat in the watershed, finding an alarmingly low number of wrens surviving in San Bernardino and Riverside Counties. 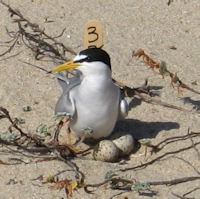 The California Least Tern is a seasonal resident that nests in colonies along the Pacific coast in California and Baja. This once abundant sub-species is now listed as a state and federally endangered bird. Early in their decline, least terns were collected to adorn women’s hats. Today, habitat destruction is the biggest threat to this species as nesting habitat is prized for recreation and residential development. SAWA biologists are contracted annually by the Orange County Water District (OCWD) to monitor the nesting colony at Huntington Beach State Park. 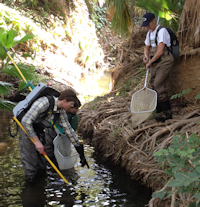 The Orange County Water District (OCWD) prepared the Santa Ana Sucker Habitat Restoration and Population Reintroduction Reconnaissance Study. This study was developed with the intention to identify potential native fish habitat restoration opportunities within the Santa Ana River Watershed. Sunnyslope Creek was recommended as a candidate site for potential native fish habitat restoration based on variables such as known occupied habitat, predation threats, and recreation pressure. SAWA biologists conduct surveys for the Santa Ana Sucker and participate in the restoration of Sunnyslope Creek. 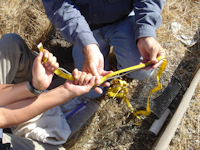 Reptiles and amphibians can be threatened by exotic species of plants and animals and can be excellent indicators of the overall health of a system.  Recent studies have clearly documented a dramatic decline in reptile and, especially, amphibian populations throughout California (Jennings and Hays 1994). SAWA biologists conduct surveys using pit-fall traps, cover boards, night drives and area search methods to inventory the local herpetofauna throughout the watershed and to obtain baseline data for future comparison in support of watershed restoration.

Biologists also deploy camera traps. These serve as an effective aid in overall species inventories, especially in areas where large mammals and other elusive species may occur.

For service inquiries, contact Lead Biologist Melody Aimar at 951 780-1012, or via email